Chicken coop with run tour: Moving the girls into their new home

We moved the girls and Mr. Basil into our Horizon Structures chicken coop a few weeks ago and so far, they are loving life out there.

Due to our crummy weather this spring, we weren’t able to move them out until they were about 8 weeks old. Or at least, I’m blaming the weather. Maybe we could have moved them out earlier – they were fully feathered – but this chicken mama didn’t like it when temperatures were projected to go below 0 overnight in the early weeks of May.

I don’t fully have everything set up the way I want it yet, but we are getting closer each day. I thought I would give you a snap shot of their lives out there, the coop and the new run. 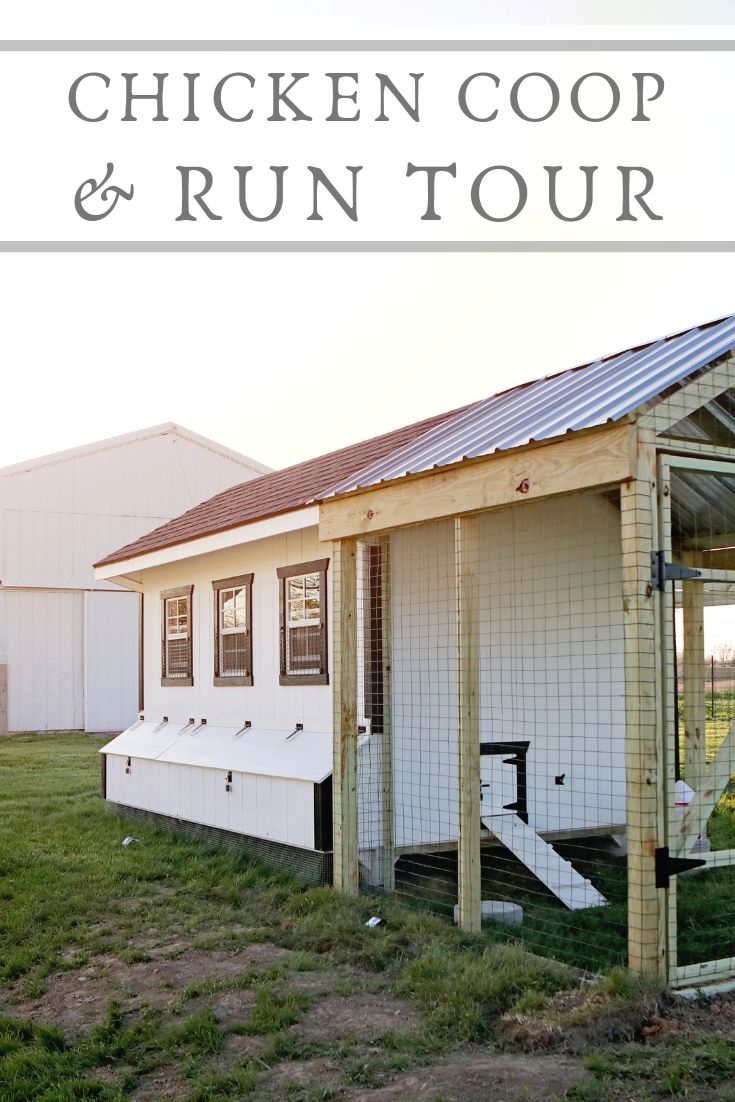 As previously mentioned, we purchased out chicken coop from Horizon Structures and we couldn’t be happier with the decision. There’s a full tour of all the bells and whistles here but I’m excited to show you how it looks now that we have the chickens living in it full time.

On the outside we went with a white, black and grey theme. It matches all the other building on our property, and I love that we were able to customize it down to the details such as door and window trim.

Horizon Structures gives you so many options that you’re bound to find one you love. You can pick out the colors and features that will fit your farm, homestead or suburban backyard.

(Yes! They do make smaller coops that you can have in a neighborhood should the city and association allow it. You can check out some options here.)

While I know looks may not be important to everyone, you should know this coop functions like a dream too. As a first-time chicken owner, I knew our coop had to do one thing for me; make life as a chicken mama easier and less gross. 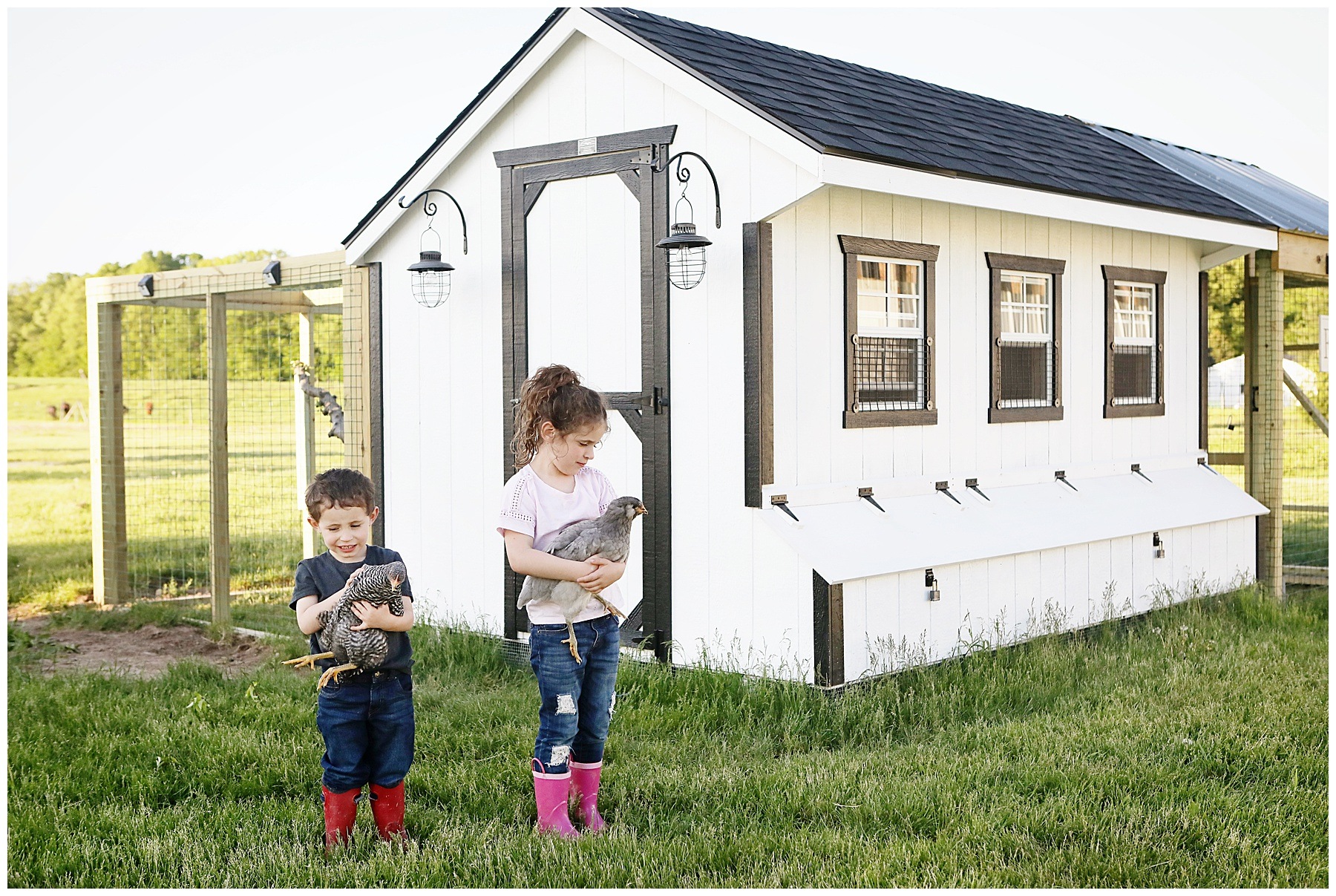 The windows and the vent allow for airflow on even the stuffiest of days – although, admittedly, Michigan hasn’t had many of those yet. The air inside has never been stale or overly smelly.

The chicken door is the perfect size and the man door is large enough that I can fit a wheelbarrow though it if needs be.

The locks on the chicken and the man door are nice and stiff so even if they’re unlocked, I doubt a predator could finagle them.

On the outside I added some lights, some locks for the nesting boxes and the run. Other than that, the coop came ready to go the second they took it off the truck. 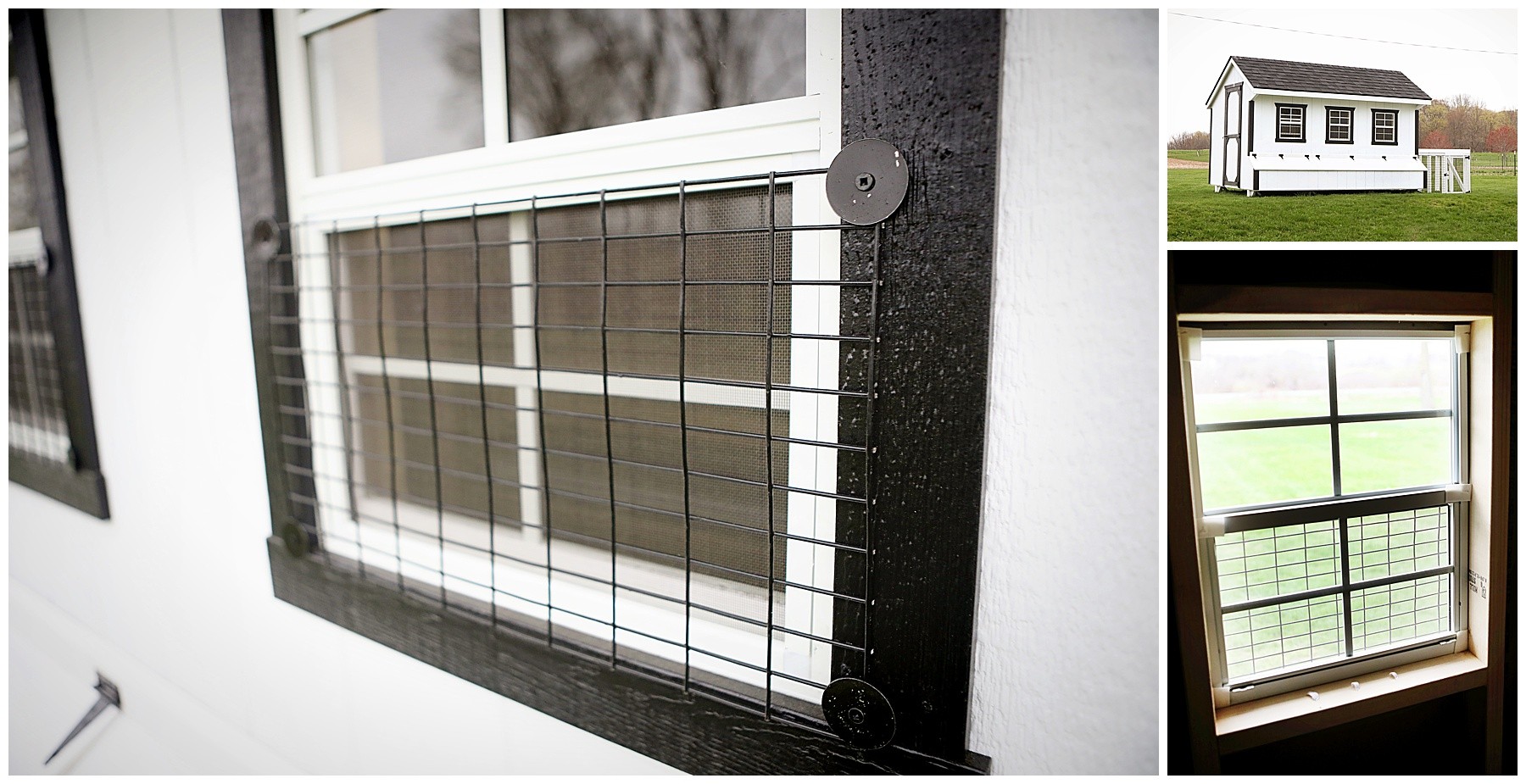 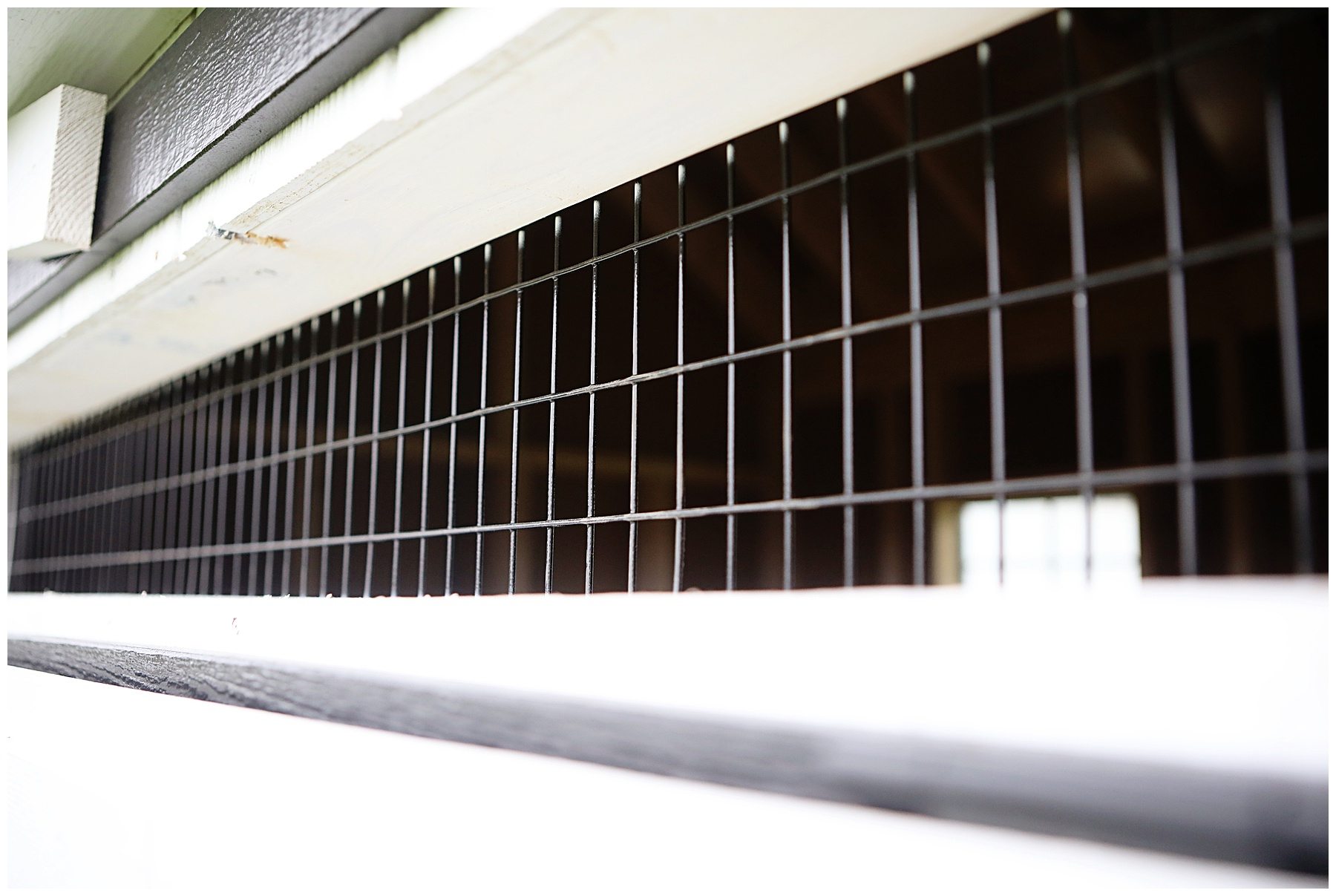 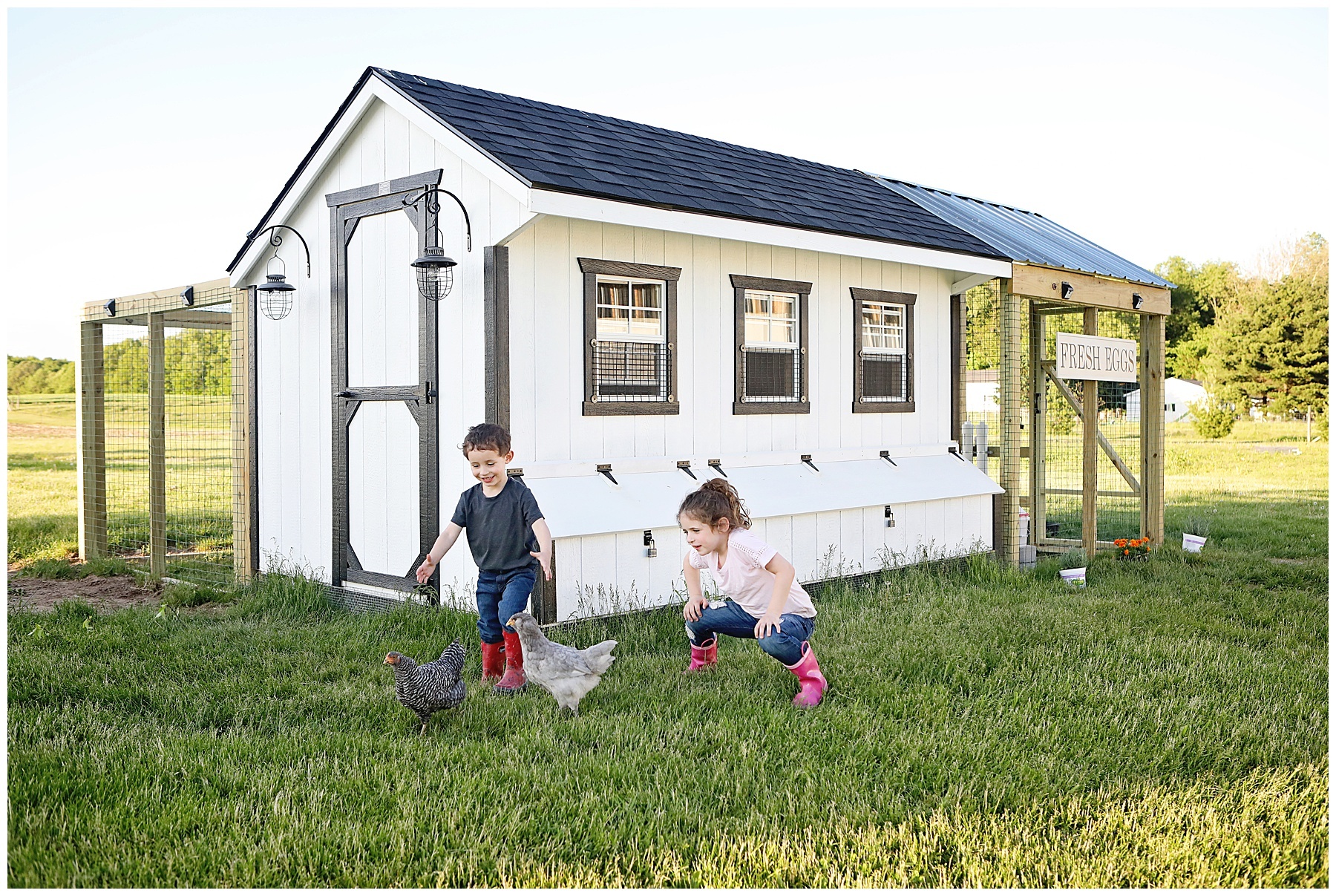 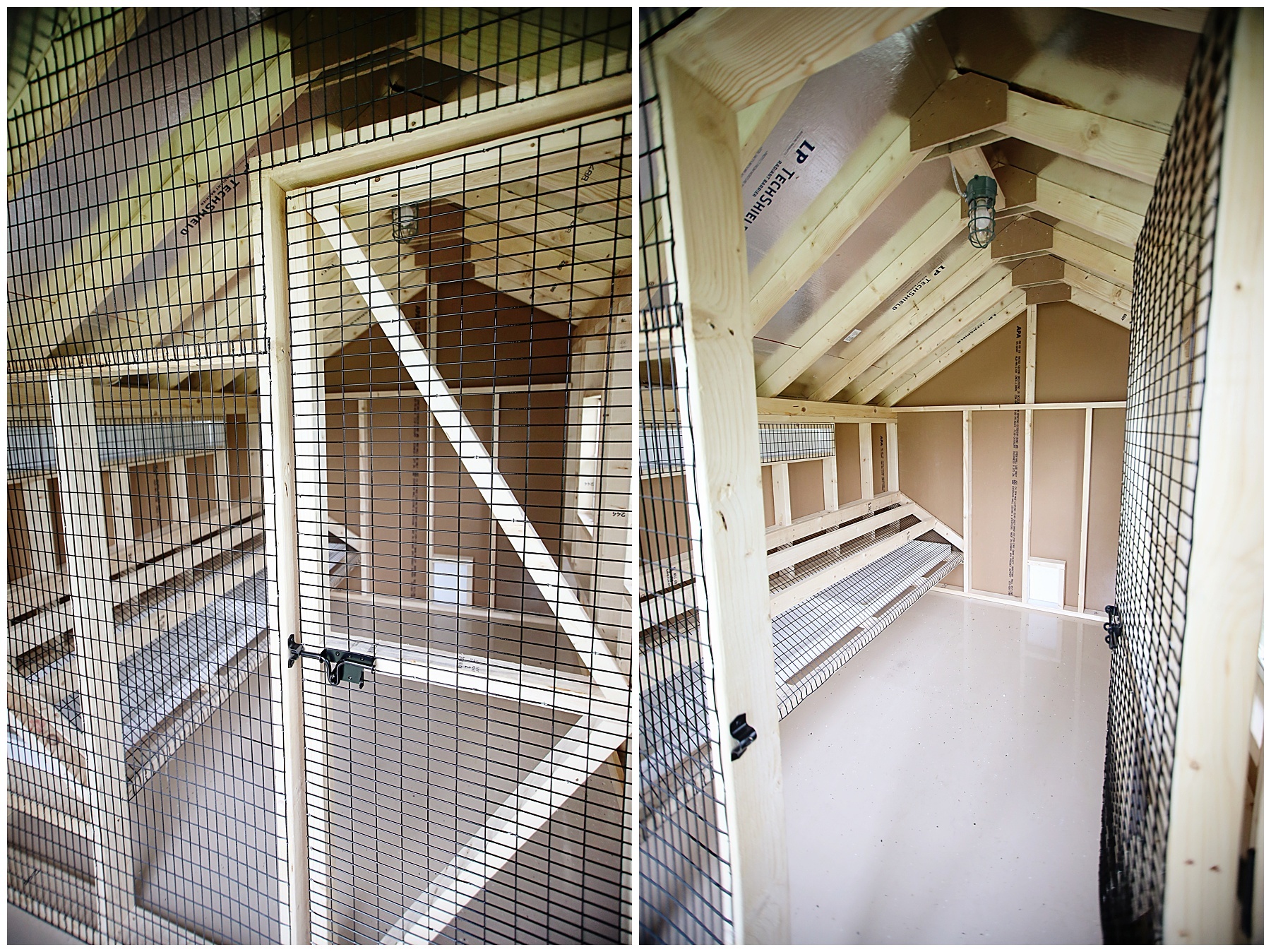 On my side, I fit two, steel garbage cans side-by-side for food storage. These cans are rodent proof. Or at least, I’ve never heard of a rodent chewing through steel. I store a large bag of feed in each, treats, the shovel for the food and a large funnel that I use to add the feed to the DIY PVC feeders that I made.

I also store a bucket that I use for cleaning their poop and transporting it to the composter. Probiotics, electrolytes, a small medical kit and other random items round out my side of the coop.

On the chicken side of the coop, I cannot say enough good things about the roost bars and the poop trays. This is truly a brilliant idea from Horizon Structures. This combo has made my life easier and less smelly.

Basically, under the roost bars there are two, pull out trays. Since the birds potty so much at night, a lot of their poop ends up in these trays. I’ve added sand and PDZ to them and then use a kitty litter scoop to scoop it right on out.

Since my girls like to cluster in one place at night, the bulk of their poop ends up in the left tray. However, they do like to take a little siesta every afternoon and I noticed they like to do that on the right side. 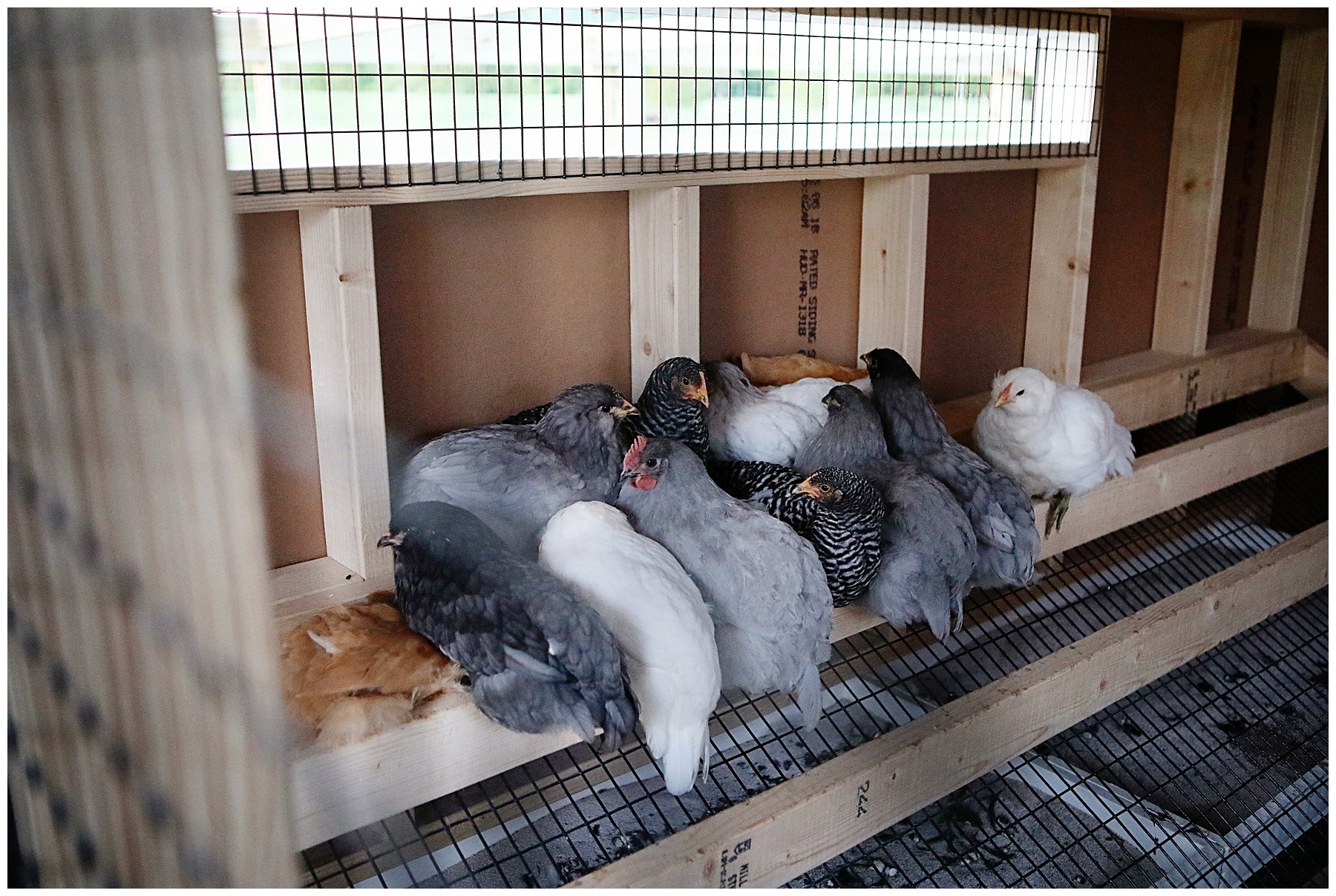 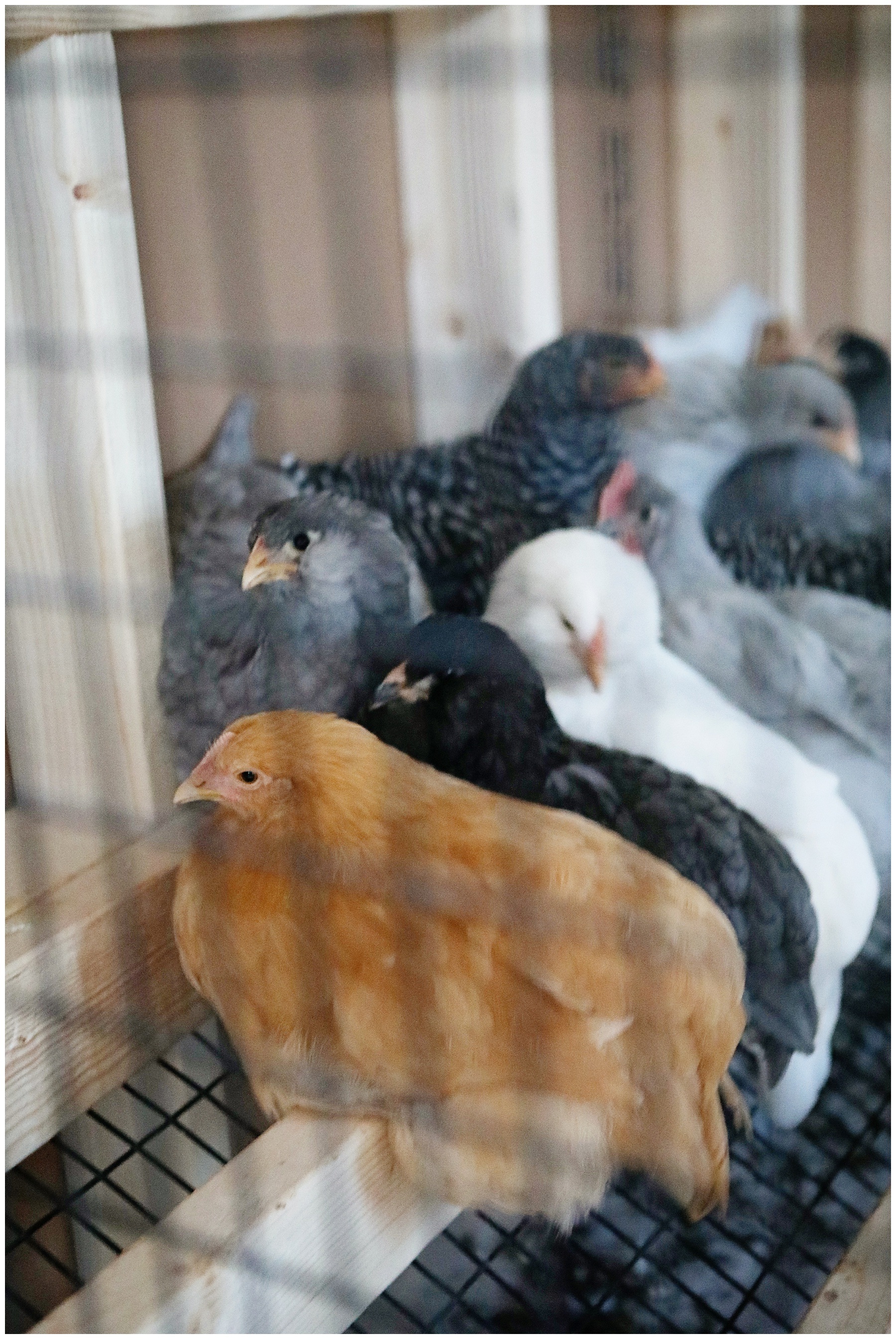 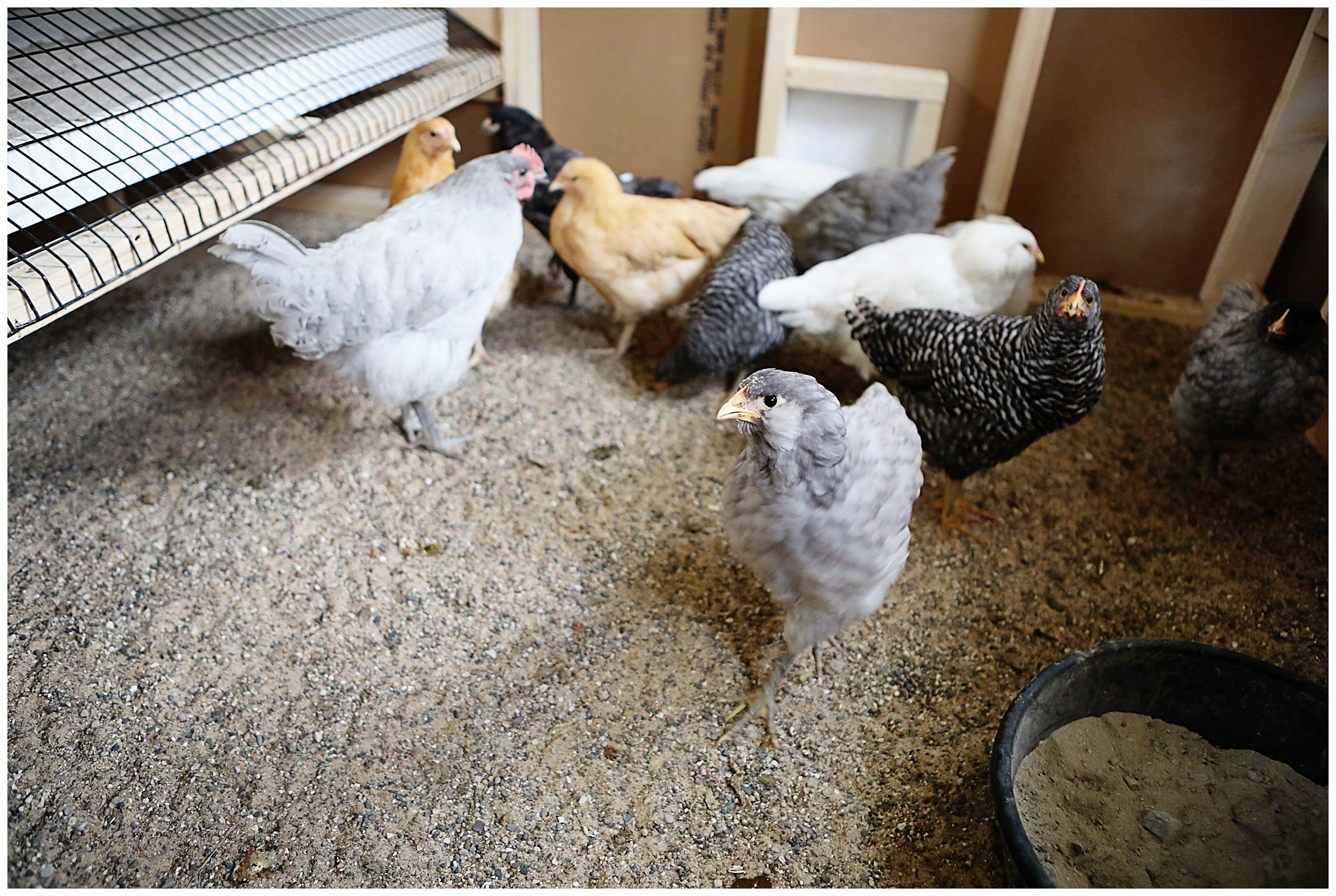 As far as the nest boxes go, my girls are a bit too young to take full advantage of them still. However, they should start laying sometime next month and I think they will appreciate how spacious each box is.

As a side note, you may notice I decided to use construction sand in my coop. I did this for a variety of reasons, most notably cleanliness and smell. This is for the warmer months only. In the winter I’ll use the deep litter method. I’ll fully explain all of this in another post.

The contractor team that’s working on our barn renovation built our chicken run for us. I gave them a sketch of a design I wanted and they built it according to the sketch.

It is attached to the coop now and is fully covered. A portion of it uses recycled roofing from our barn while the largest section just has wire over the top to prevent predators from getting inside. 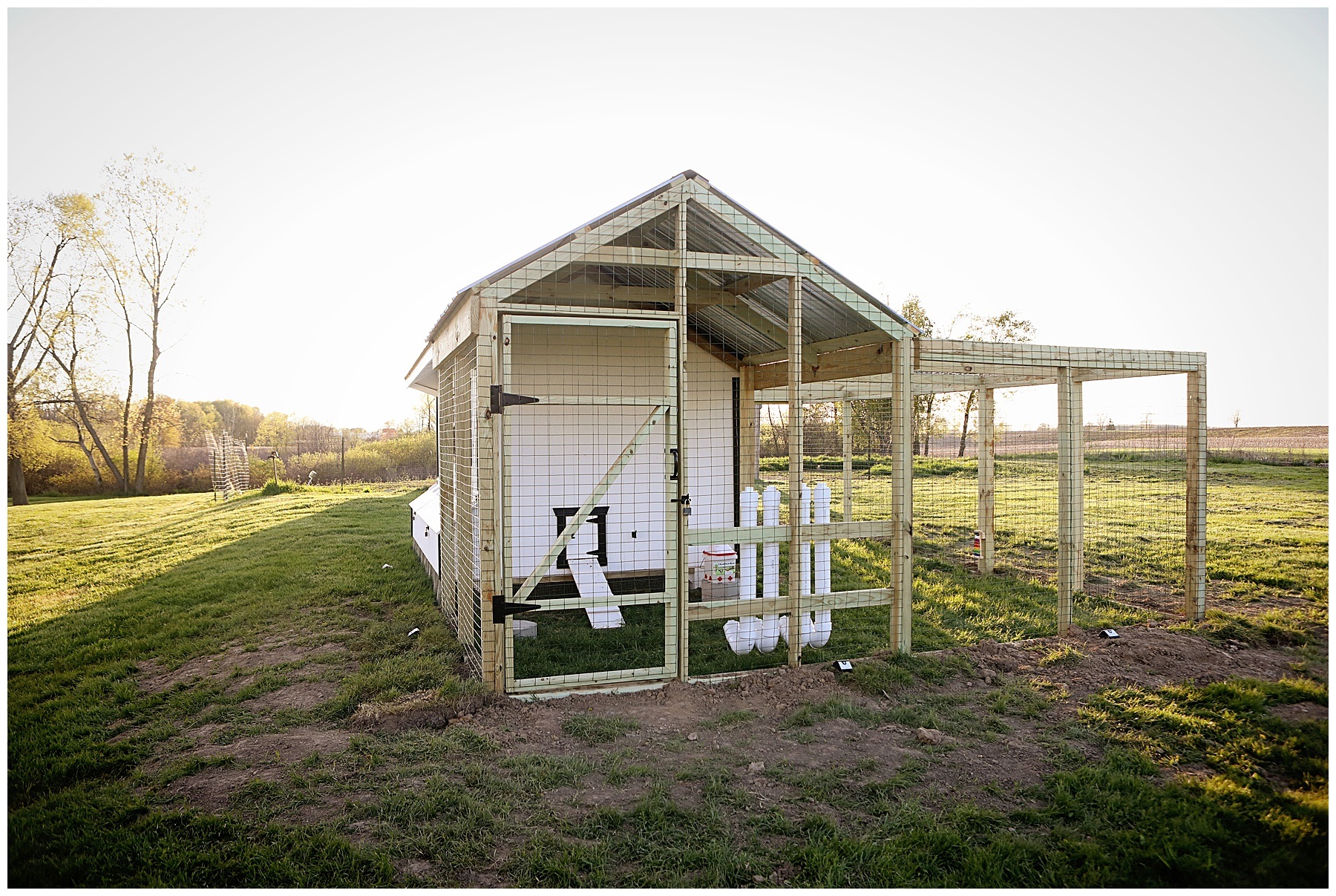 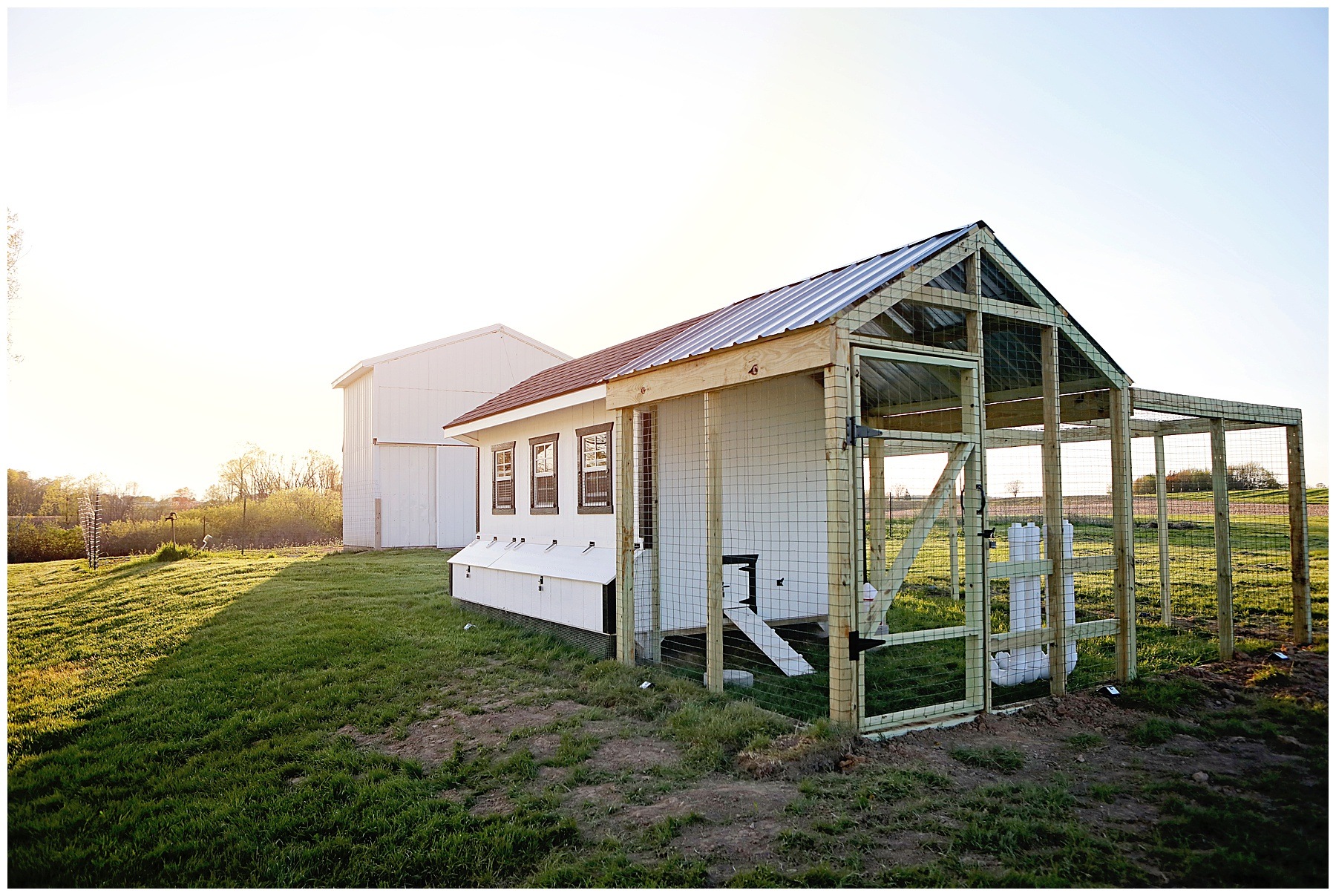 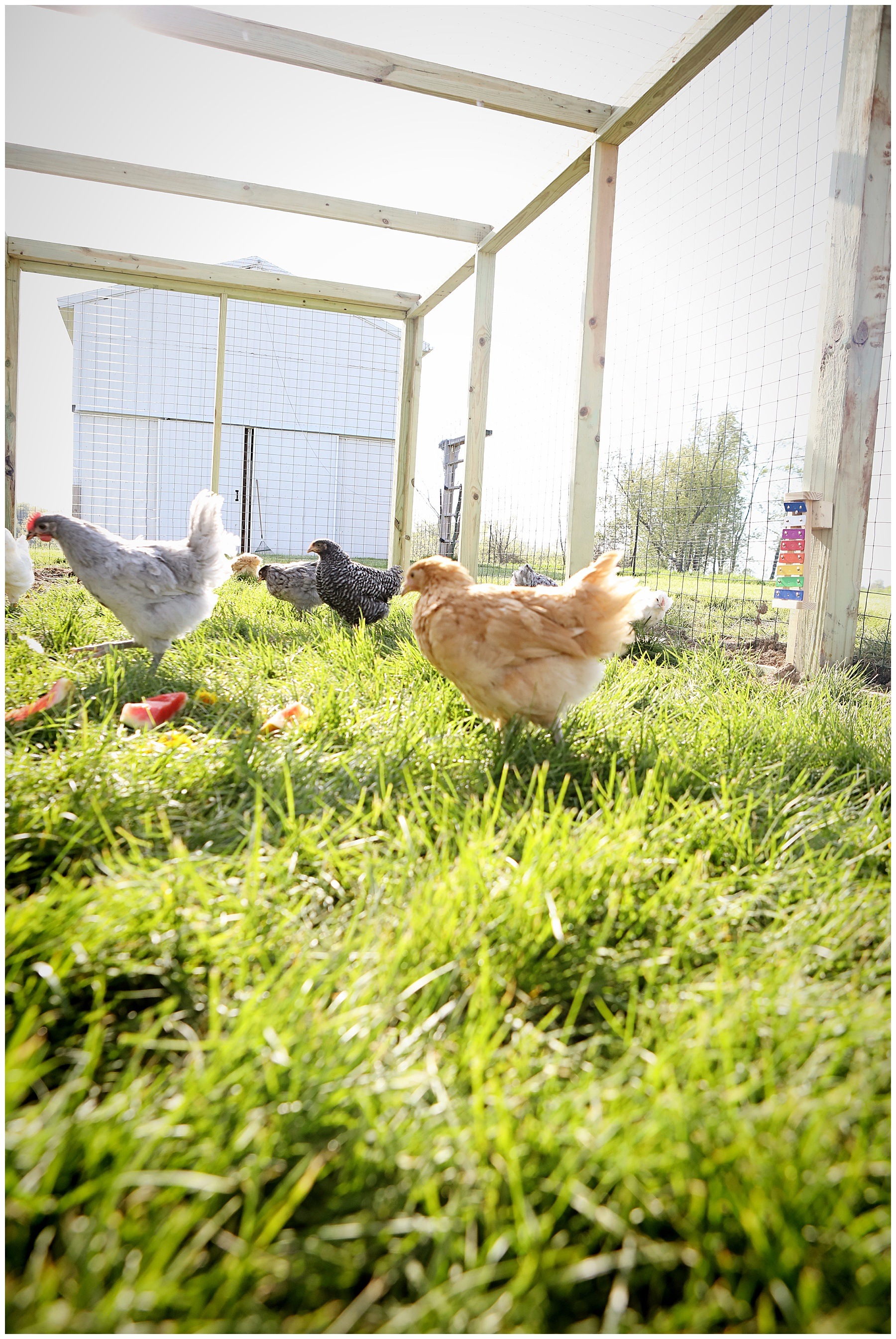 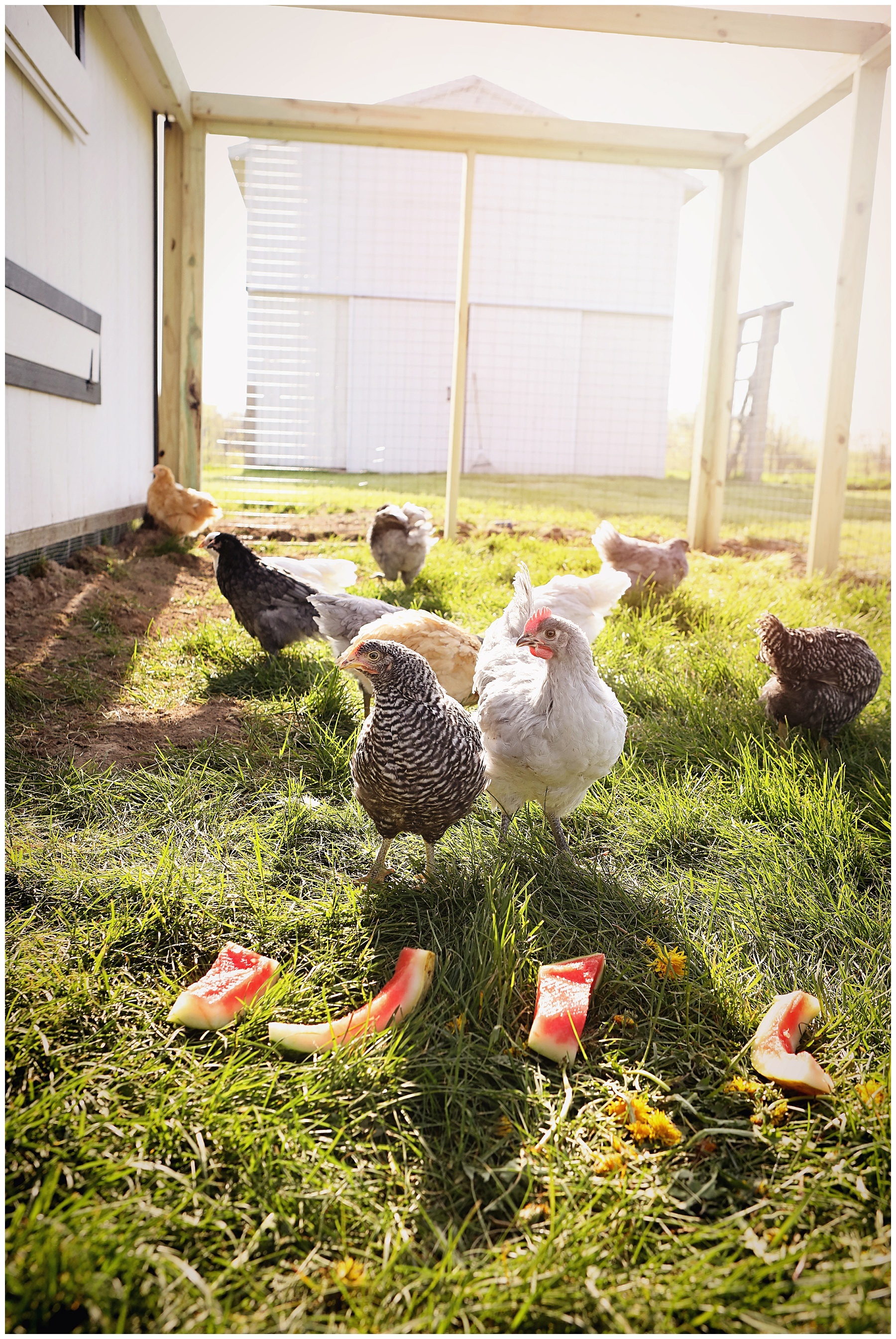 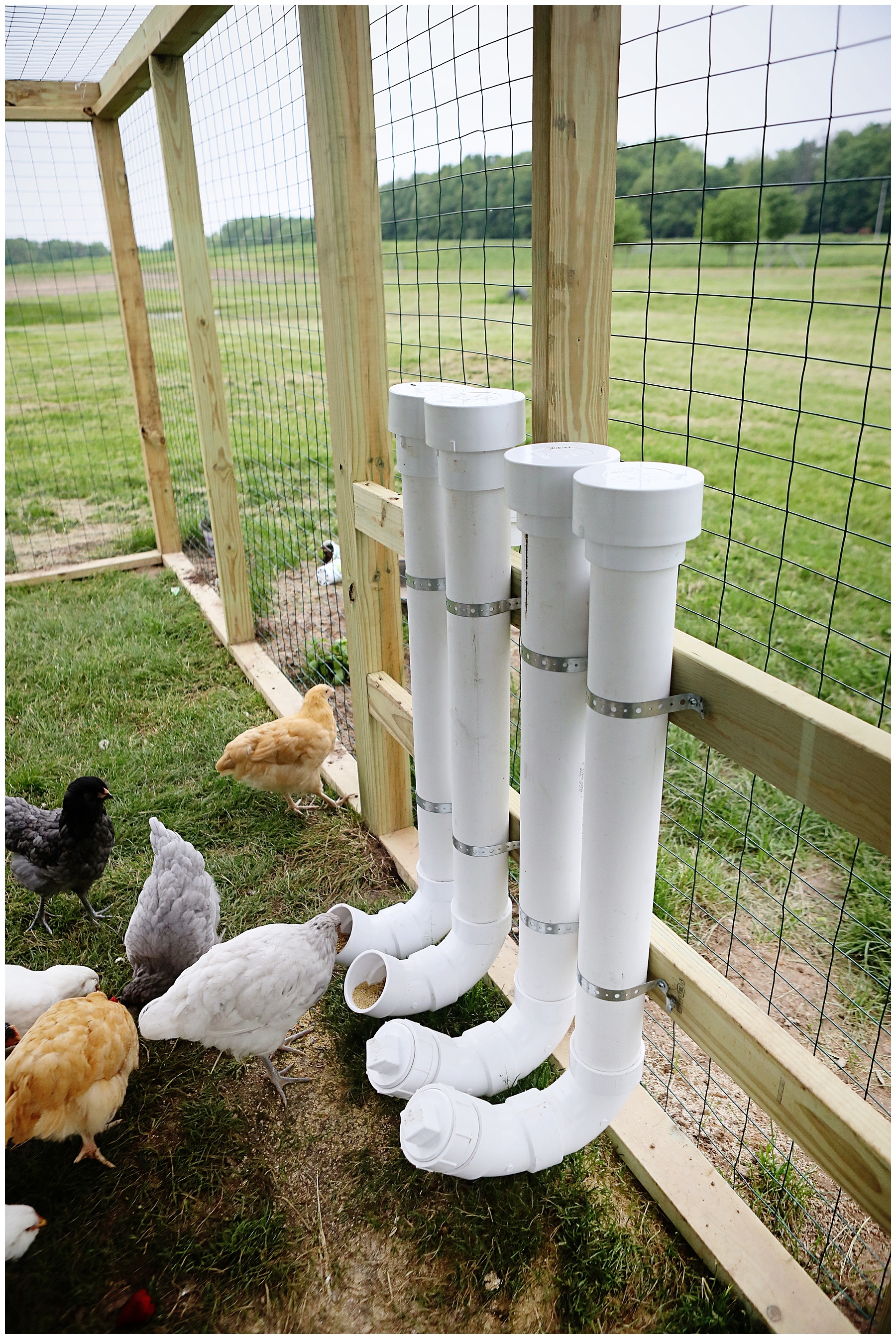 Inside the run is a place for water, their food pipes and a roosting area Kevin and his dad built with a tree we had to take down.

My goal here is to reuse any materials we can as often as we can. While I’m a girl that likes new, I also want to make sure that I’m being conscious of the environment and what will work within the ecosystem well. That said, there will be additional roosts and stumps added as we take down additional dead or problem trees. 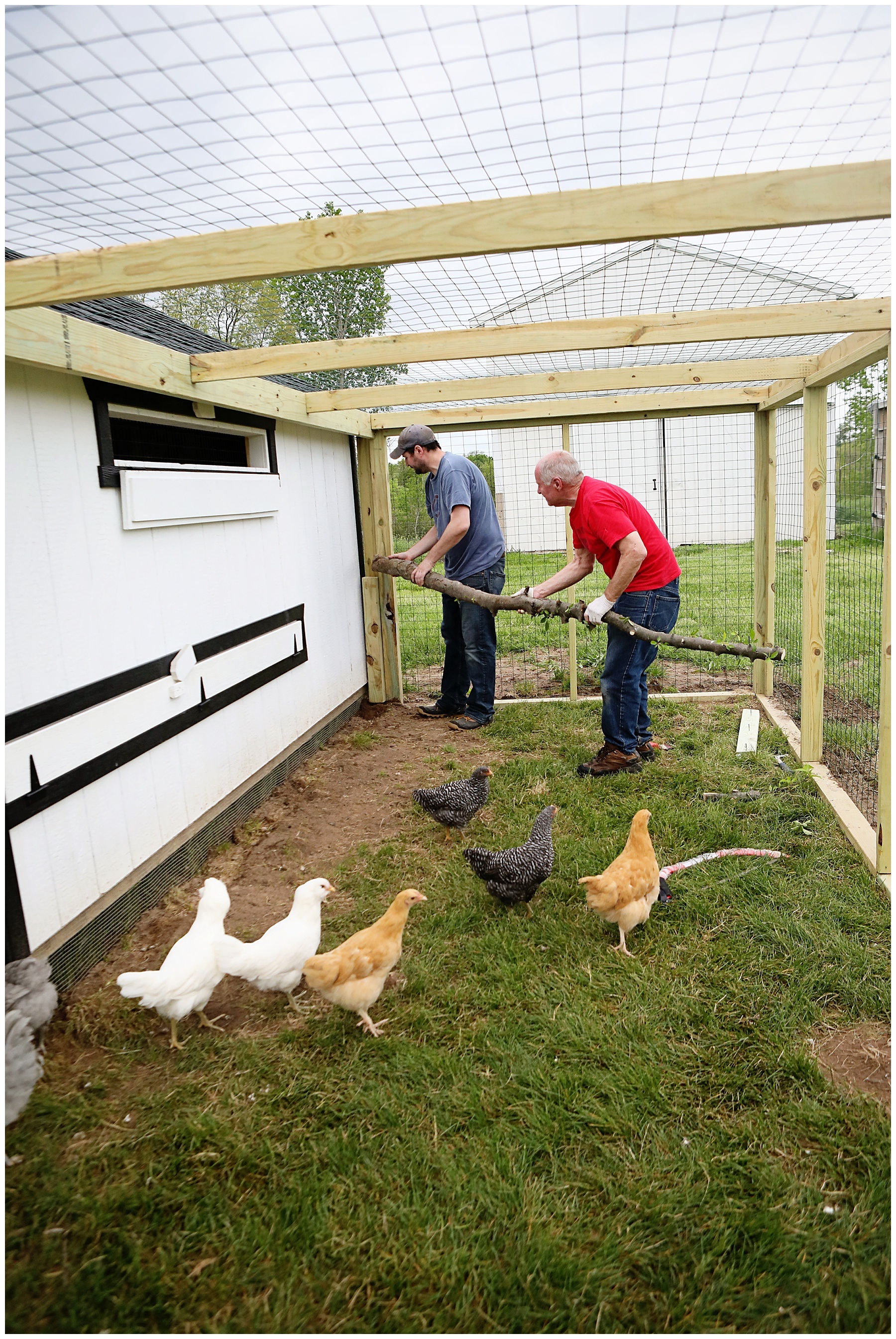 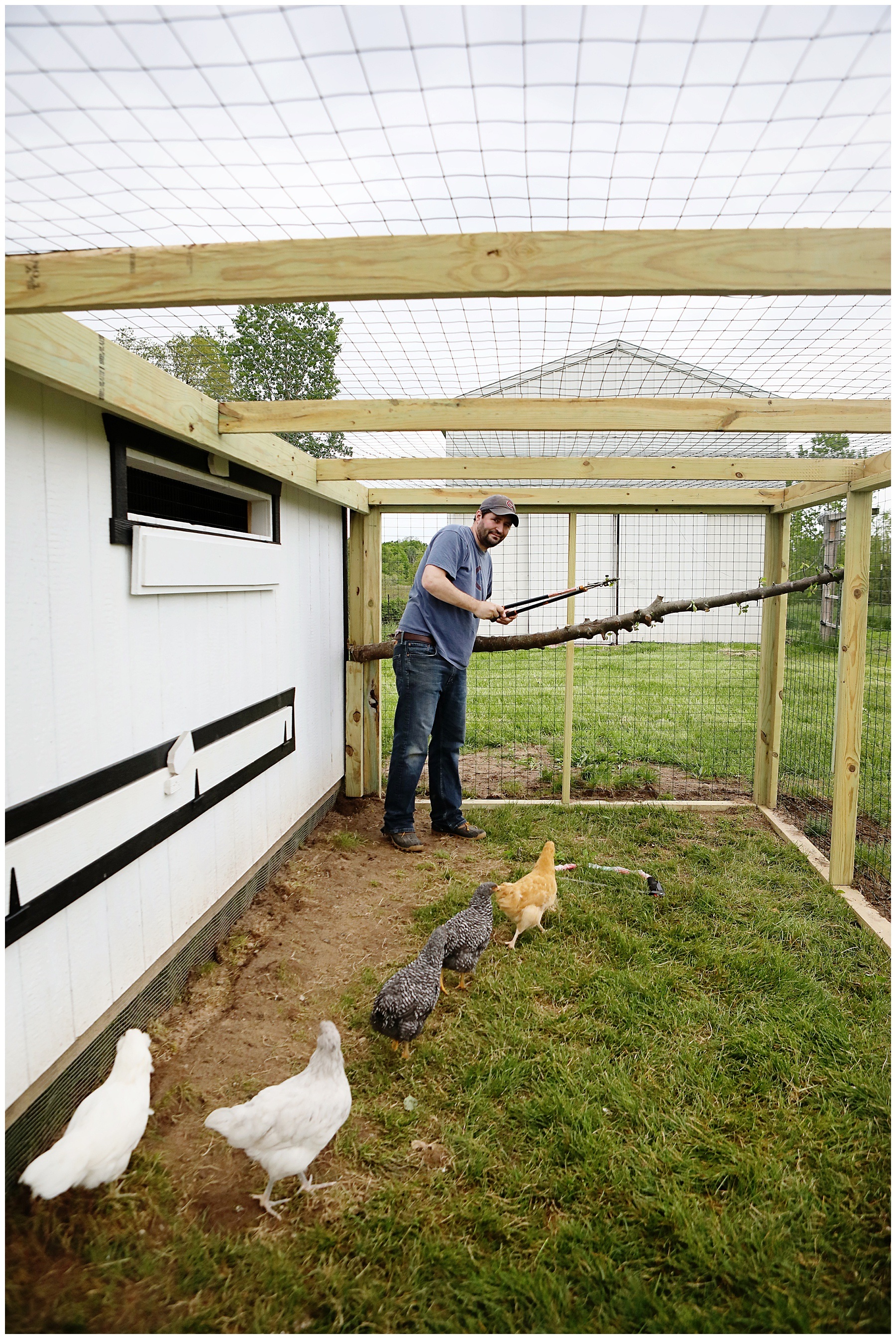 Also, for the run, we buried hardwire a foot down under the ground to keep any predators from digging their way into the run. While the coop is really secure (with hard wire on all the openings), I knew the run could potentially be a problem if we didn’t bury wire.

If I had thought about it, or enough knowledge to understand what I actually needed, I probably would have ordered a large run from Horizon Structures to match the coop. I’ll have to add that to the list for next year. 🙂

Things left to do

With most of the big things now in place, I’ve started to think about the small things. I’m busy planting a chicken garden around the coop that will be filled with lots of flowers and herbs that are good for the chickens and are said to keep pesky bugs away.

Some of these items include:

I may also add some small boxwoods for year-round color.

I’m planning to add a small, flagstone patio outside the run door too. That area became really muddy when we built the run and because it gets so much foot traffic, it’s still really muddy. Ideally, I’d like it to be large enough that I could fit a small table and chairs there so I can watch the girls while they free-range.

Lastly, I have a small sandbox coming on Tuesday that I’ll be filling up with peat moss, sand, dirt, DE and wood ash to make them a nice dust bath.

Since moving the girls and Basil outside they really flourished. They’re growing well, the pecking order has been defined in a way that’s not been overly aggressive and they seem to be happy with their new digs. 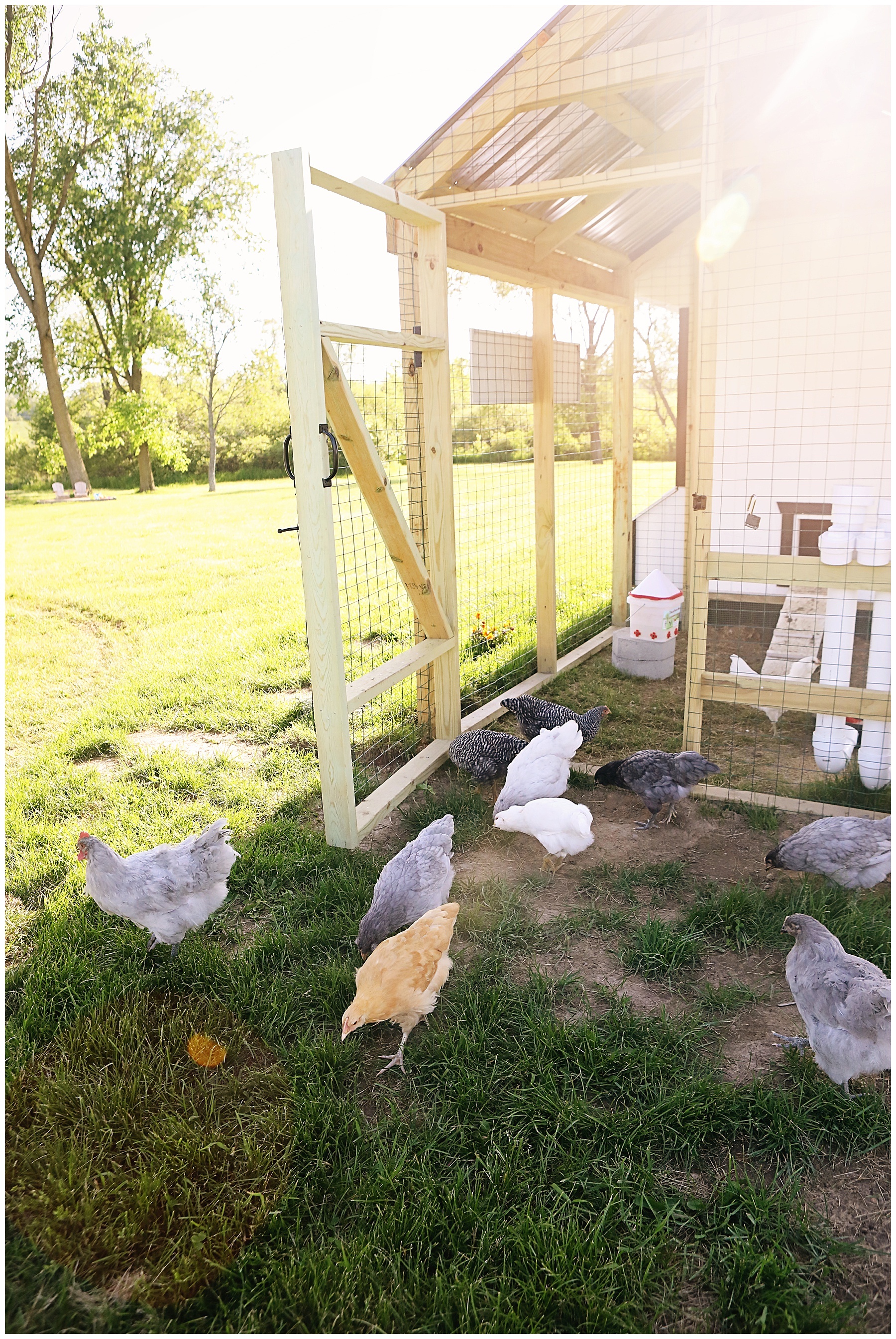 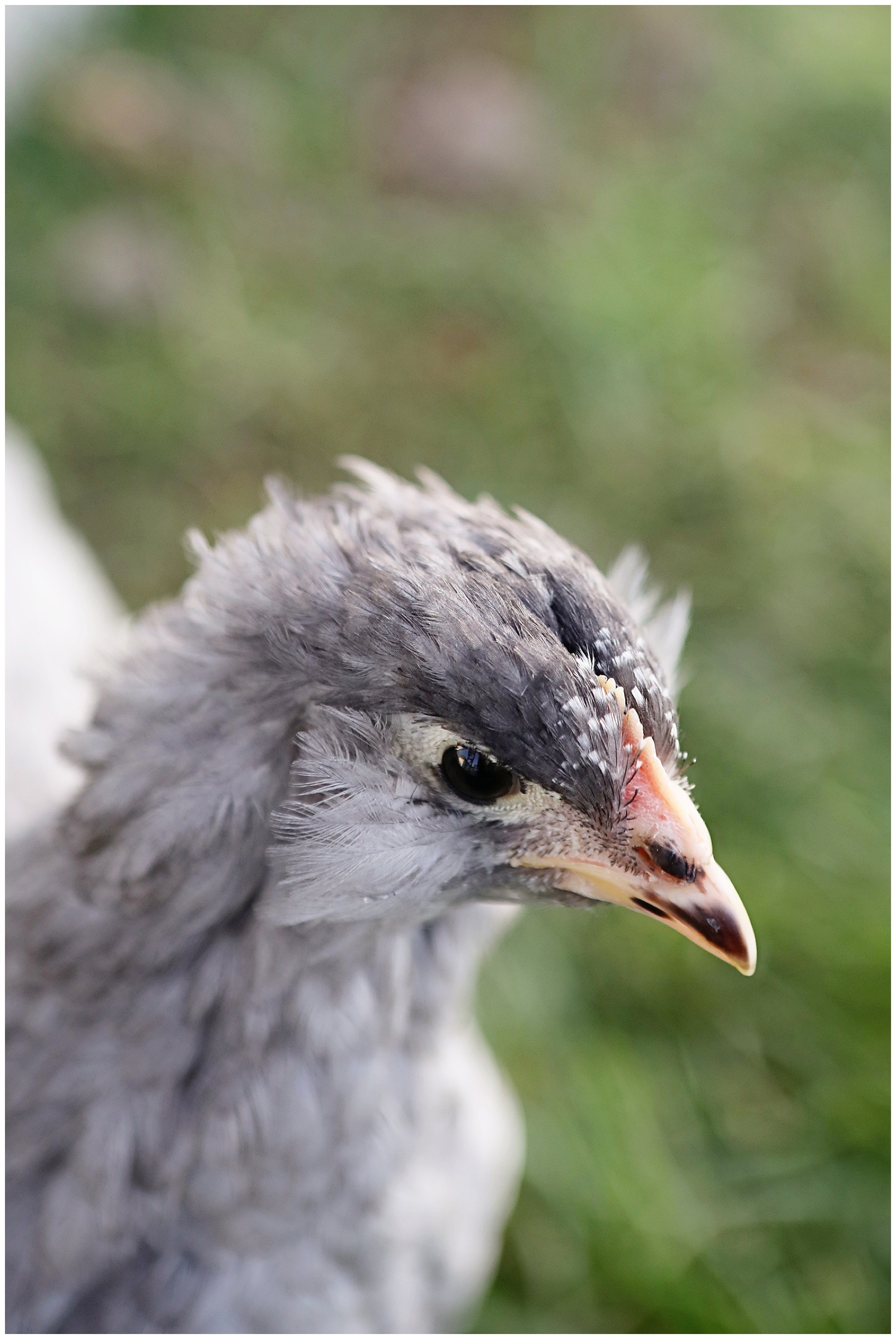 Overall though, my spoiled chickens seem pretty happy in their new digs and I feel so lucky to have them as a part of our lives. It’s truly been a joy to be able to have this whole experience with them. It’s certainly been, and will continue to be, a learning experience. However, I’m pretty positive all the best lessons in life can be learned from animals. 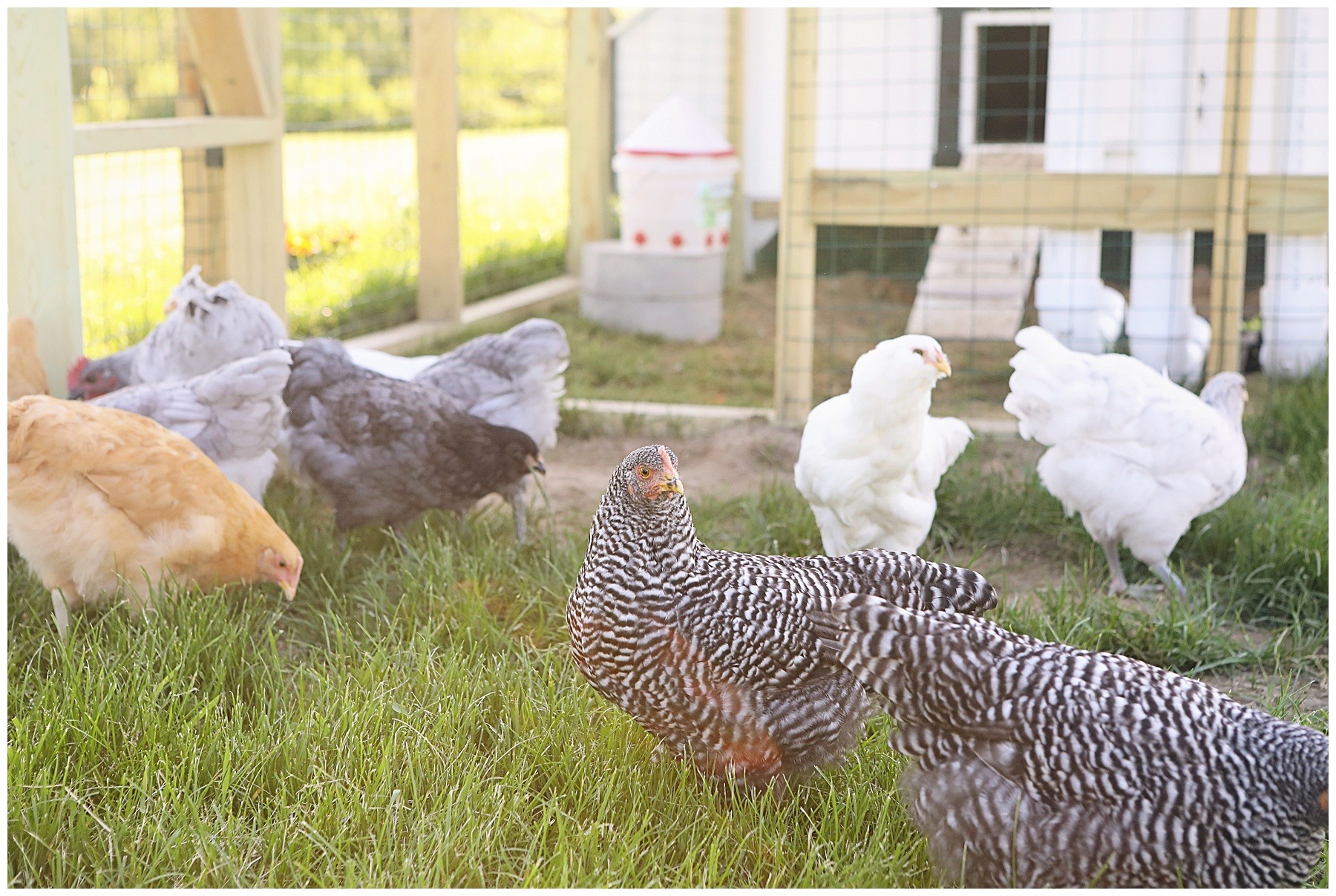 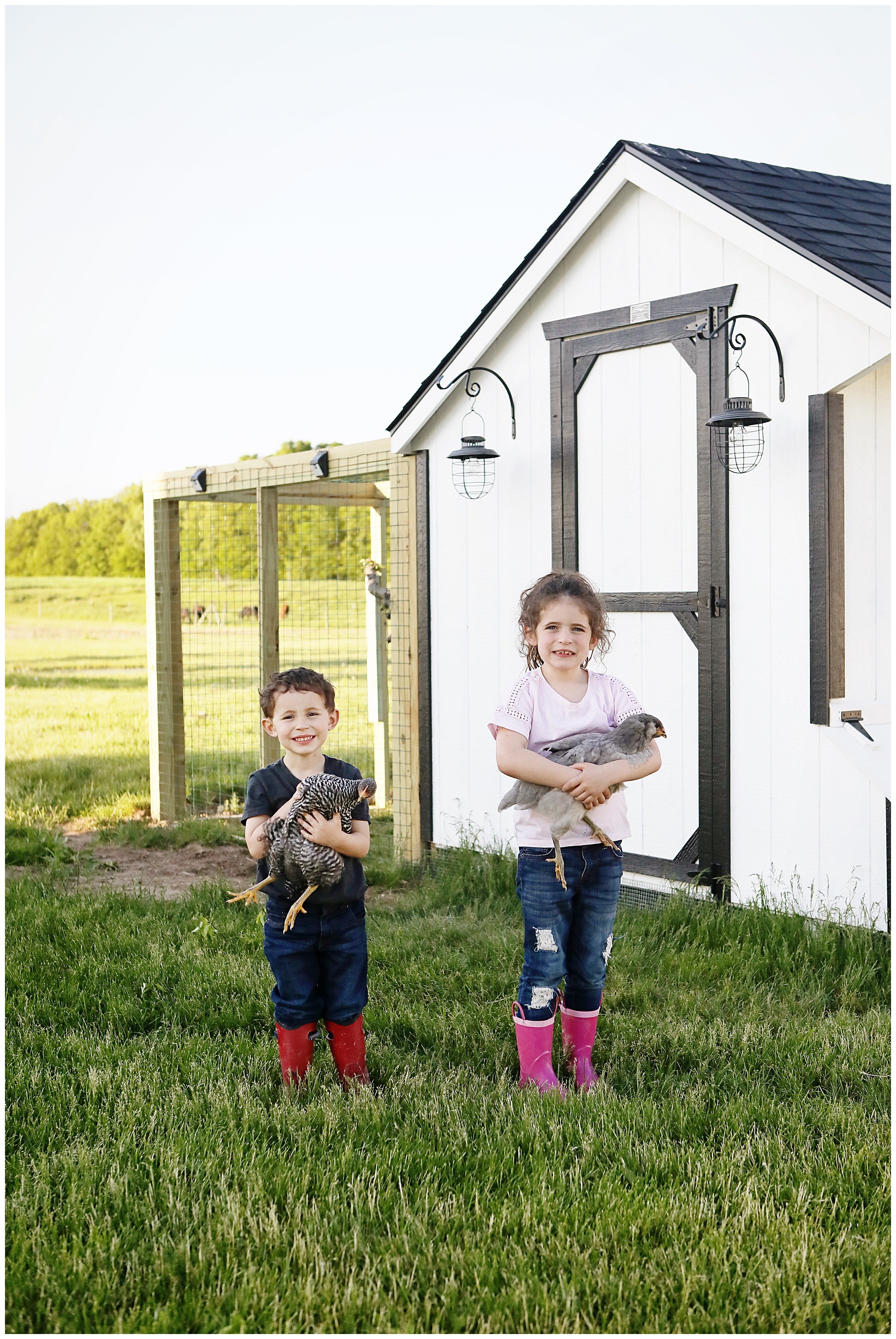 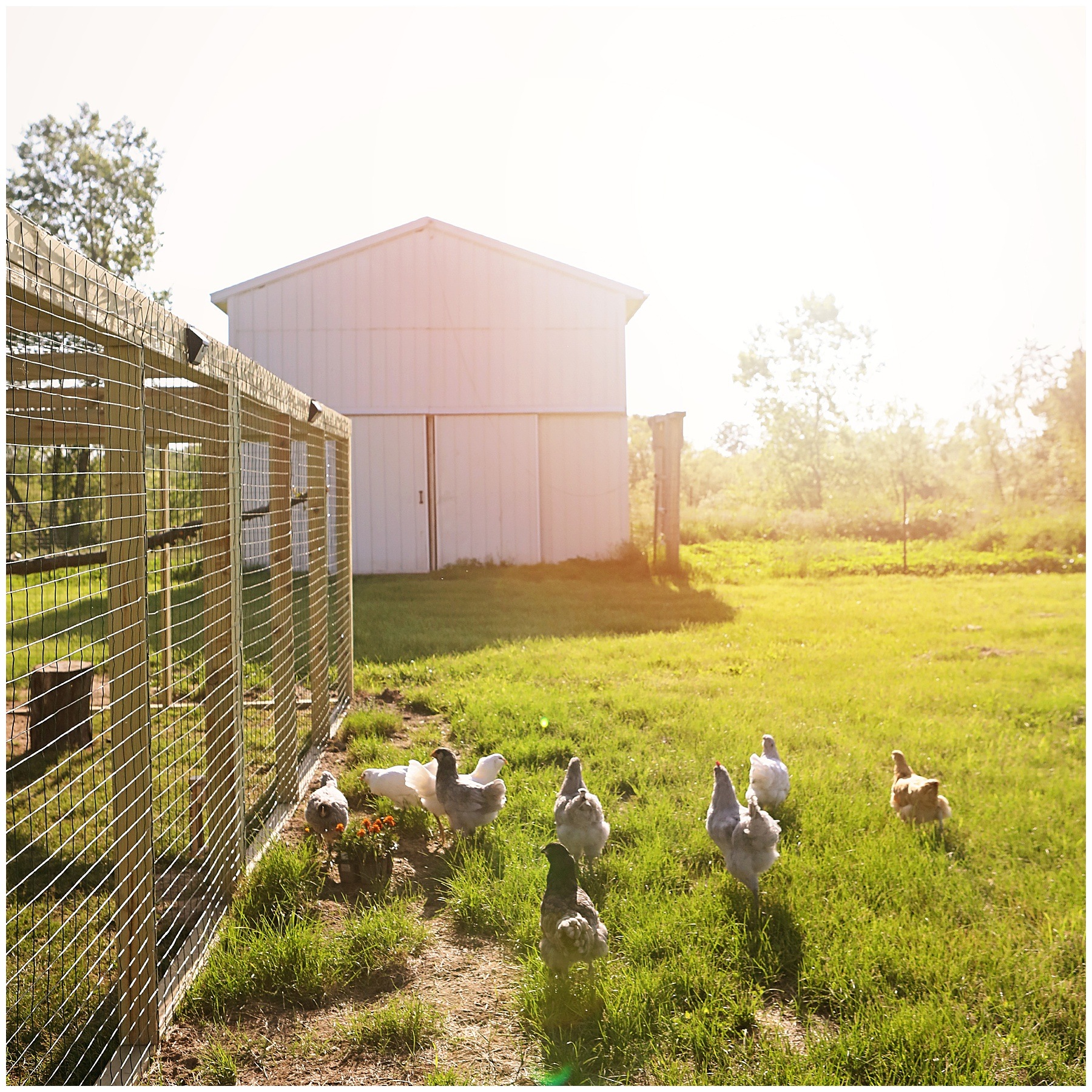 How to make dried orange slices

There’s a good chance that every year our Christmas decor will go more and more natural.…

END_OF_DOCUMENT_TOKEN_TO_BE_REPLACED

Okay, the time has come for my baby girls to move out of the house and…